Ten Years At The Top Of Their Game For Chester’s Original Sports Bar! 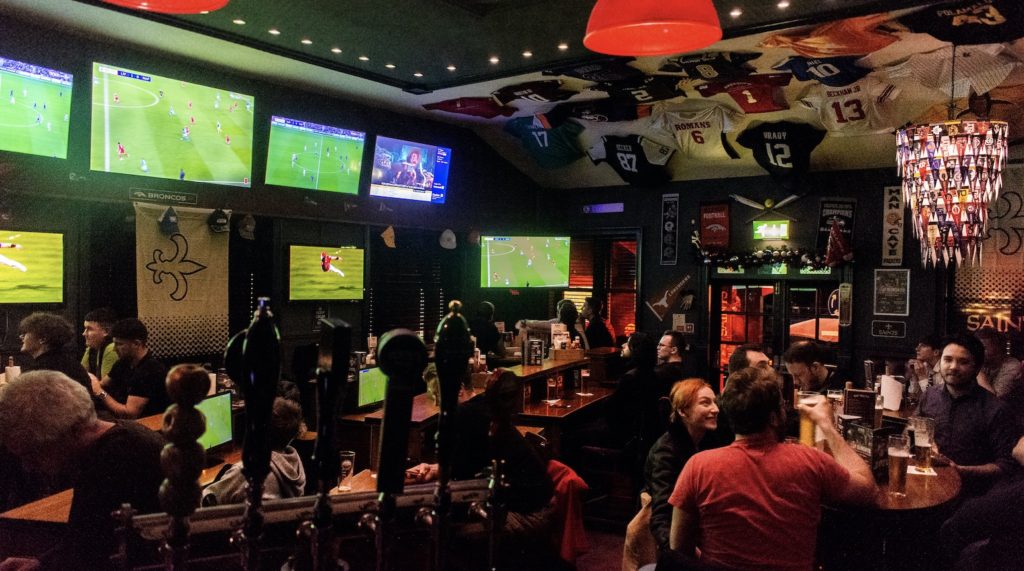 When Hickory’s founder Neil McDonnell first brought the concept that is the ‘Sports Book’ to Chester back in 2010, it initially took a bit of explaining.

Based on the sporting Mecca’s of America, a typical sportsbook features multiple TV screens, betting kiosks and banks of computers allowing sports fans to capture all the action across a multitude of sports.

Passionate about authenticity, when they launched their very first Hickory’s Smokehouse, Neil and business partner Jason Bligh set about bringing a true taste of the deep South to the banks of the River Dee and the sportsbook was central to their vision.

Packed full of sporting memorabilia with 12 HD sports screens, specialist sporting journals and desks complete with computers, the Hickory’s sportsbook brought together all the essential elements of its American cousin,  just minus the on-site betting – and it was an immediate hit.

Now, ten years on, the Sportsbook has played host to just about every major sporting moment, cementing its crown as Chester’s most loved sporting hub. From Premier League clashes to iconic World Cup games; live action golf-simulators for the Masters and even its very own Cheltenham Festival Guinness Tent, the Hickory’s sportsbook has given the city’s sports fans a place to call home, whatever their passion.

Putting NFL On The Map ‘Up North’

Famed for its huge Super Bowl party every February, the team have worked hard to put American sports on the map. From humble beginnings with just a few die-hard fans round a bucket of wings, the following has grown year on year for the past 10 years, with the pinnicle being the huge Super-Bowl extravaganza’s which attract over eight hundred fans from across the North – these guys really have evangelised about NFL since day one.

Now, the biggest Super-Bowl party outside of London, the humble Hickory’s sportsbook plays host to a new generation of NFL fans each year with a massive marquee set up on the car park to accommodate them.

With its own authentic tailgate party, an all-American food court, giant screens and of course, the all-important cheerleaders, it’s just about the biggest NFL shindig this side of the pond.

As Hickory’s has grown in popularity over the years, with tables at a premium during busy times, would Neil ever consider losing his beloved sportsbook in favour of extra tables and more dining space?

‘Never’, commented Neil. ‘The sportsbook is an integral part of the Hickory’s story and its very much here to stay. We’ve developed a real Hickory’s sporting community through the Sportsbook. Along with the sporting ethos, it’s a place where guests can come to get-away from it all, enjoy a pint, plug in your laptop and catch up on what’s going on. We are lucky to have such loyal guest. It’s about the right people as much as it’s about the right sports and long may that continue.’

So, with the NFL season fresh upon us, racing back in business and live football back on our screens Chester’s original sports bar shows no signs of slowing down.

‘We love the autumn as it kicks starts most of the major sports again,’ commented Neil. ‘ It’s the start of the National Hunt season, the NFL is in full swing and this month we even have the final of the Six Nations to look forward to, let alone the Masters starting.’

‘We are lucky to have a great layout in the sportsbook with plenty of room day-to-day and even a bit of dedicated outside space, plus a lot of the major games are also shown live in the bar along with our bar booths which come complete with their own screens too, so even if you can’t get into the sportsbook you don’t have to miss any of the action. And, for all your NFL fans don’t worry our Super Bowl party will still be happening, but with no queueing at the bar, we’ll be looking after you with table service.’

To find out more about what’s on at the Hickory’s Sportsbook or to book a table please visit: www.hickorys.co.uk