The WLGT Essential Guide to the Best Beer in town! 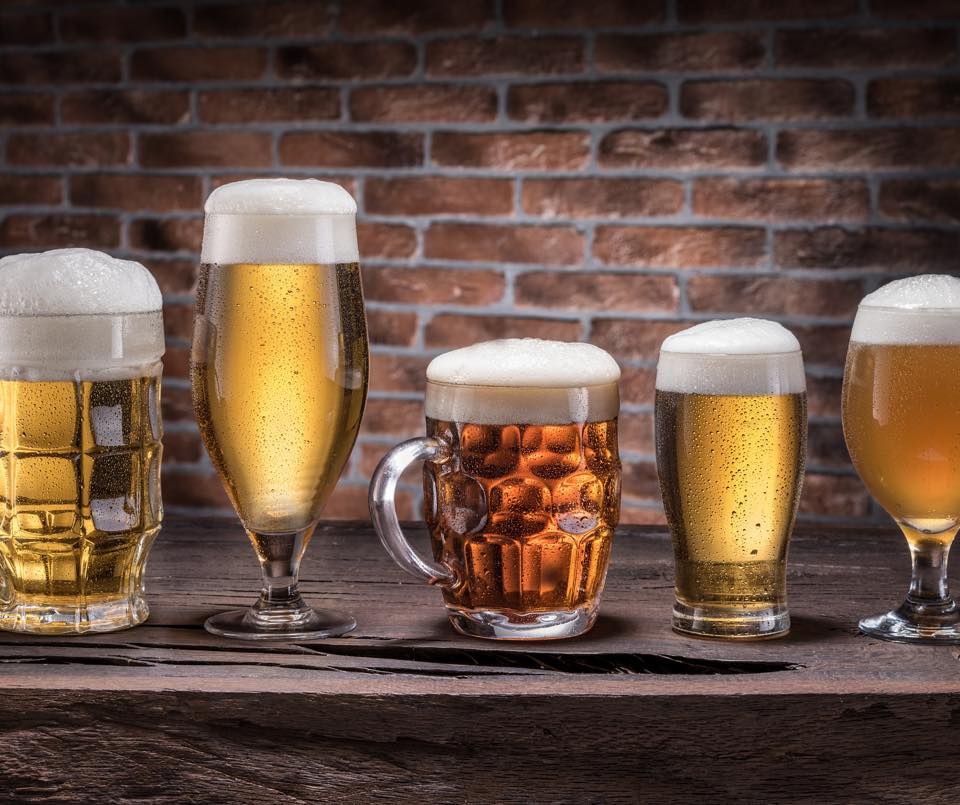 What is the first thing that comes into your mind when you think of beer? Everyone has an opinion – there can’t be any other drink that conjures up so many stereotypes.

To the uninitiated beer is a drink only quaffed by rowdy men when the football is on. OK. Sometimes it is. And I like a beer when the footy is on as much as the next man (or woman). But the world of beer is so so much more than that. Oh, and I’m not that rowdy.

Wine connoisseurs will wax lyrical for hours about wine – the nose, the body, tannins, vintages, food pairings, acidity levels…….and quite rightly so as the world of wine is a complex and rewarding one. If I’m honest wine is also a world that I never have fully understood – my wine buying skills are usually limited to a scan of the label with the Vivino app and the misguided notion that the more you pay the better the wine is. Which isn’t right, but you were already thinking that before you got this far.

In the delight of a year that 2020 is – the beer world is becoming (if it hasn’t already) as sophisticated as the world of wine.

Enter a world of juicy, flavoursome, zesty, citrus infused, complex artisan brewing and there is a great deal to discover, much of it produced on our door step by passionate small brewers producing world class batches of hand crafted small batch beers good enough to grace anywhere from the finest restaurants to your local pub and – at the moment – your lounge,

The truth is that the beer drinker has never been so spoilt and naturally innovation will ensure that things will only get better.

Beers – like wine – come in many different forms or styles and there is a great family tree here (http://www.drinkinginamerica.com/beer-family-tree/) which shows the absolute complexity of the hundreds of different nuances and types of beer and how they have all evolved from each other. This is an American family tree, but it works. If you have a UK version let me know.

Look at all of those varieties and think about that the next time you ask your barman for “a beer”. It’s like going into Primani and asking for “some clothes”.

The main types of beer are lagers and ales, from which all forms of beer can trace their family roots.

A good starting point with your beer discovery is the accessible and quaffable world of lagers. For those who don’t know I run Deva Fest and we famously declared last year’s event as a “Carling Free Zone”. That’s not to say there is anything hugely wrong with Carling. But it is a bang-average mass-produced lager. It’s the Blue Nun of the beer world – there’s probably nothing wrong with it, but it just doesn’t feel adventurous. It’s like you can’t be bothered.

Lagers are beers that ferment slowly at low temperatures from the bottom up. The lager family has evolved with different brewing styles, recipes and ingredients to encompass the bierkeller friendly German lagers (clean taste with a hint of barley malt and mild hoppy bitterness), lighter American lagers (crisp and refreshing, lighter malt and hop notes), European lagers (lighter bodied, earthy and a hint of cereal) and Pilsners (crisp, hoppy, and with a higher bitterness).

Head over to the Ale family for a warmer fermentation and a beer with a typically sweeter, full-bodied fruitier taste. Like all things beer tasting and preference is subjective, but I find that often the more complex beers are to be found within the ale family, and some of the best porters, pale ales and IPAs – if you haven’t tried them before – will leave you truly surprised as to the depth and complexity of what a beer can achieve. Oh, and they taste awesome.

Derived from the ale family are Indian Pale Ales (usually abbreviated to IPAs, an heavily hopped ale with strong overtones of citrus, floral and fruity tastes tempered by a bitter flavour note), Stouts (a silky darker beer with strong tones of coffee, chocolate and liquorice), Porters (often confused with stouts, another darker thicker beer, often fruitier than stout, with cereal and caramel tastes in abundance), Pale Ales (hoppy and malty, golden in colour, crisp flavour, possibly what many people think of when they use the generic term “beer”).

I may have missed your favourite type of beer and some of them can cross over into two categories such as German Weissbiers, which sit between the two families having characteristics of both, whilst an Oatmeal Stout is more lager like in characteristics than an ale. Others such as the darker Belgian beers could end your night pretty quickly if you don’t treat them with respect.

Beer is produced pretty much everywhere in the world.

I am particularly jealous of our German cousins who have some amazing beers (Warsteiner, Berliner, Paulaner, Edringer etc)

But here in the UK and in Cheshire we are very lucky to have some world class artisan brewers right on our doorstep. A fact that is often overlooked – simply because wine has historically hogged the limelight. We are also lucky enough to have some great beer resellers offering the absolute best of the world’s beer line up along with some of the great brews being produced on our doorstep. 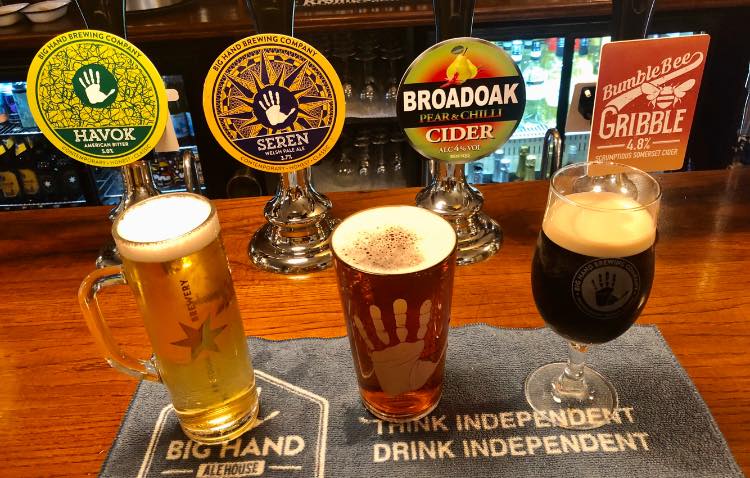 Big Hand Brewery are perhaps best known for their fabulous bar on Watergate Street where the Fat Cat was for many years, but did you know they brew pretty much all the beers on draught there locally themselves? Big Hand have won five SIBAs (Independent Beer Awards) in the last three years, and as my office is pretty much over the road from them this is one of my favourite bars in Chester. I miss Nikki and her team and can’t wait to get back in there for a pint of Super Tidy – a hoppy soft, sweet and lemony IPA with a floral finish. Big Hand are selling five litre kegs online and are have adapted to the joys of Covid by moving into bottling their beers for the first time. An online shop is about to open, but you can order today by emailing info@bighandbrewing.co.uk or sending them a message to them on Facefriend https://www.facebook.com/BigHandBrewing/  and Dave or one of his team will drop them off.

Find out more about them at http://www.bighandbrewing.co.uk/#home

Spitting Feathers run the Brewery Tap on Lower Bridge Street in Chester and have the West Kirby Tap on the Wirral too. They have their own brewery just outside Chester in Waverton, so by ordering online you are supporting a local business. Our recommendation is the SIBA (Independent Beer Award) Gold medal winning Brainstorm Craft Pale Ale with its zesty dry flavour and fresh aroma, but in all fairness anything you order here will be good. You can also pick up pins which are 36 pint kegs for just £50 including local delivery – just £1.40 per pint. Order online at https://www.spittingfeathers.co.uk/ 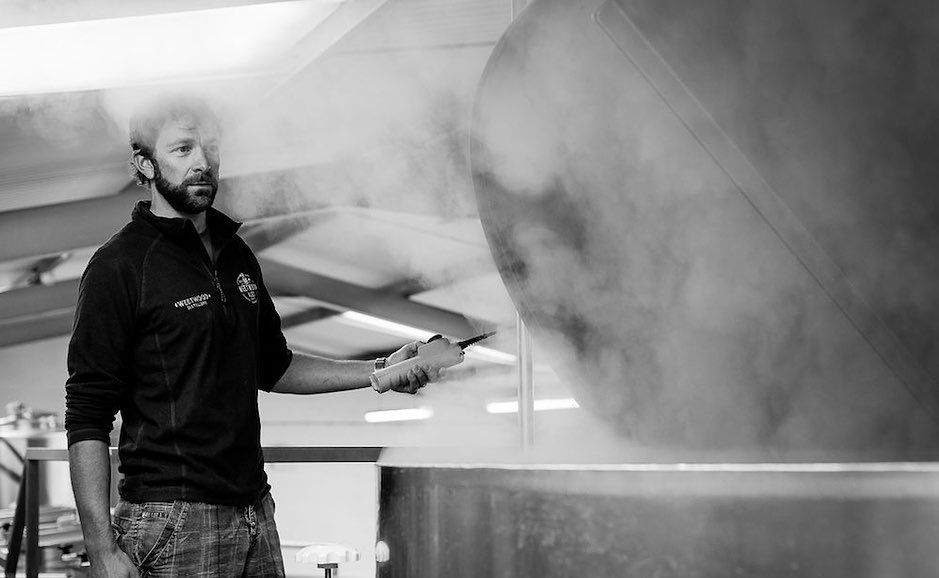 Weetwood Ales is a family run brewery in Kelsall. These guys don’t have any of their own pubs, but you can find their award-winning beers on the pumps of all the best venues. When they reopen to the public you will be able to book a tour of their brewery so you can see how your pint is made. They also make some fabulous small-batch gin and vodkas here. Recommended is the Eastgate Amber Ale which was brewed for the centenary of Chester’s famous Eastgate clock – a very hoppy ale with a long sweet finish. Find out more and order here https://www.weetwoodales.co.uk/brewery-shop/ 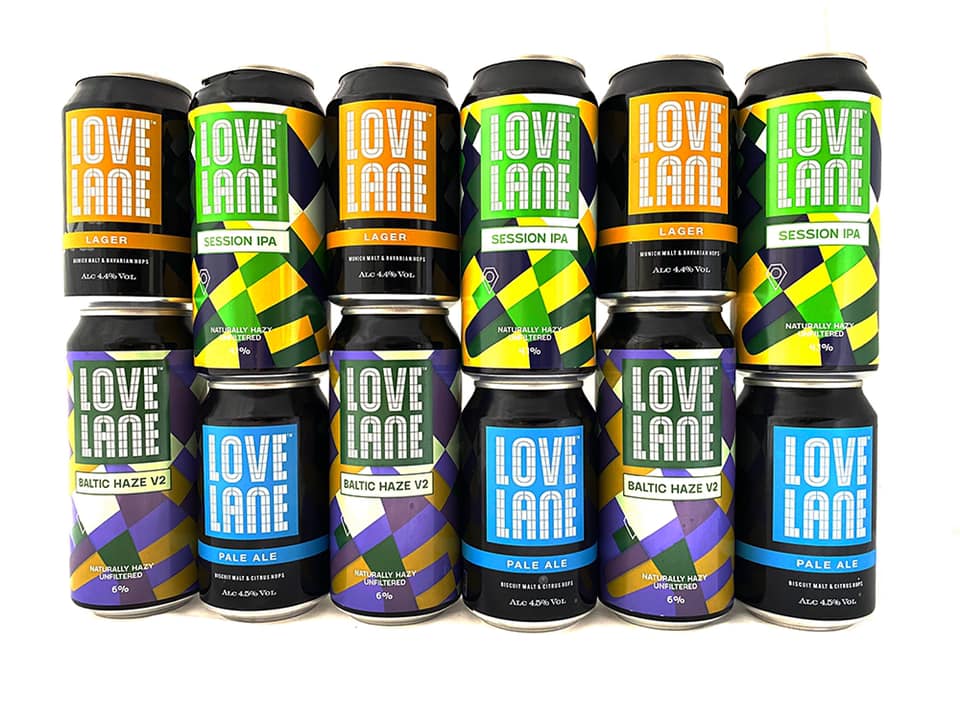 Love Lane Brewing are just up the road in Liverpool based in the uber cool Baltic Triangle. Our pick from them is the Love Lane Session IPA with lime and pine notes whilst their Big Double Dozen is a good way to discover their offerings – 24 mixed cans of IPA, pale ale, lager and hazy ale. Mini kegs are also available. Order online at https://lovelanebeer.com/shop-page/ 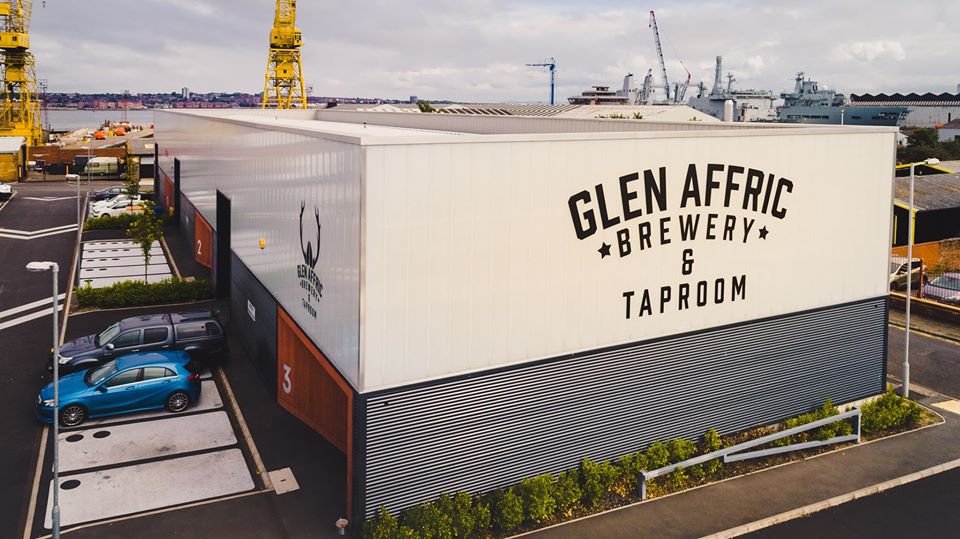 An honourable mention to Glen Affric brewery in Birkenhead. Their online shop is currently closed, but if you can find any of their innovative beers in your local beer specialist please do dive in. Their online shop reopens on July 1sthttps://www.glenaffricbrewery.com/

It’s easy enough to take a bimble around the likes of Tesco or Sainsburys where you will find plenty of excellent beer choices on the shelf, but just as a sommelier would guide you to the wine of your dreams in a restaurant you should trust a knowledgeable independent beer shop to advise you on your next beer discovery, or simply just to have the good stuff in stock.

Chester Beer and Wine are based in Handbridge and they do exactly what it says on the tin – a great selection of beers with free delivery of up to five miles. If this blog has put you in the mood for a voyage of discovery, they will put you a surprise box together and you won’t be disappointed. https://chesterbeerandwine.co.uk/

Beer Heroes on Watergate Street are offering delivery throughout Chester, Wrexham and the Wirral and they have some wonderfully obscure beers for you to discover as well as all your favourites. The Watergate Street taproom is also now open again for collection and takeaway. https://kyte.site/beer-heroes-chester

That Beer Place in Chester Market probably needs no introduction and is now also delivering locally. If you haven’t sampled their bar in the market, then you need to – it is an Aladdin’s cave of wonderful beers to be discovered from the UK and all around the world. https://thatbeerplace.co.uk/

Last, but not least some of our favourite bars and pubs are starting to reopen for take away hand-poured pints for you to enjoy at home. There are too many to mention here, but some of our faves are:

Exotic Booze Club in Chester Market – the full Kona Brewing range live and direct from Hawaii is out of this world – Big Wave golden ale saw me through a week in Vegas two years ago https://www.exoticboozeclub.com/

Popcorn in the centre by the Ampitheatre – one of the few places to have Mahou on draught https://www.facebook.com/PopcornBarChester/ 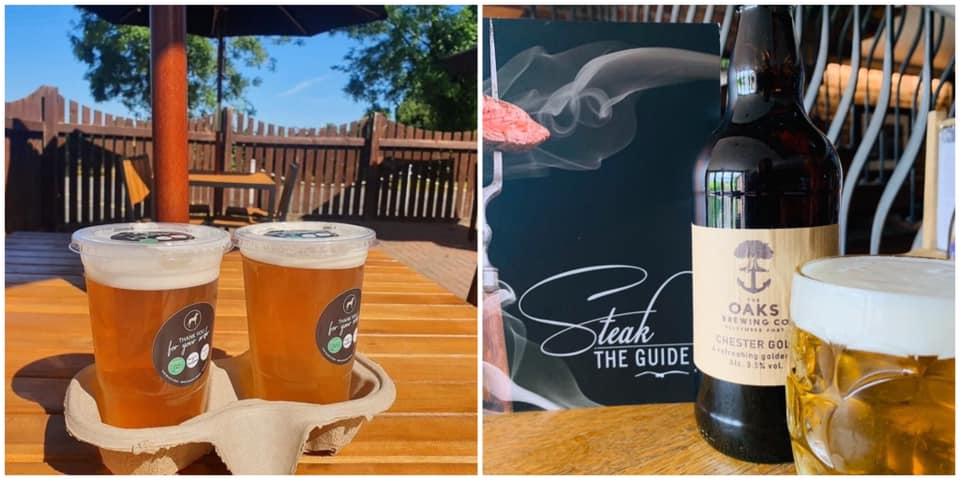 The Black Dog / The Chester Fields

The Chester Fields in Mickle Trafford – a great range of local bottled beers is on the menu https://thechesterfields.co.uk/

More bars and restaurants are reopening all the time, so like my lockdown hair this won’t age well.

At WLGT we are working to put together beer tasting experiences and talks from some of our great local hostelries and brewers when it is safe to do so.

So, what have we learnt?

I was only supposed to write 500 words, but beer is a complex subject, more so than many people think.

There are no wrong answers. If Carling does float your boat and you enjoy it get stuck in, but hopefully you will be inspired to discover and see beyond the mass-produced marketeer led brands to try something different, hopefully locally produced and maybe even recommended to you by one of the many experts out there ready to help in these venues and shops.

There is much to discover, and many local artisan brewers there to brew it for you.