Futures In The Frame For Young D/deaf People 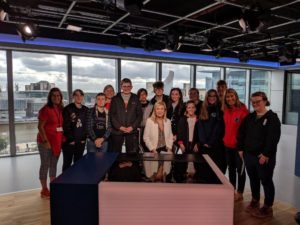 The future careers of a group of young D/deaf people were put into the frame recently after an “inspiring’ visit to ITV.

A large group from Deafness Support Networks’ Youth Vibe, along with Youth Leader Hannah Nicoll were invited to Granada Studios following a successful team up with the media group during Deaf Awareness Week in May.

On arrival at the Media City-based studios, the group met with Kerrie Gosney who showed them how to present the weather before watching the 2 o’clock news live from the gallery.

Hannah said: “A couple of the young people had a turn reading the weather which was great to watch! We also went into the studio and chatted with Lucie Meacock.”

The invitation forms part of a strong partnership between DSN and ITV Granada, which has also resulted in DSN being commissioned to join the Equality and Diversity panel for ITV nationally.

As a result of Youth Vibes’ visit, one young member was asked to write a letter to ITV, giving the suggestion of having an interpreter as an option more of the time on programmes, via the red button.

Hannah added: “It was important for the young person to also state that subtitles aren’t always an option for some British Sign Language users as some deaf people have challenges with reading English.”

Inspired by the day, producers of the news shows have invited Youth Vibe members to take TV as a career seriously and get back in touch for help with direction and routes into the world of the media.

Bob Birchall, CEO said: “We are called Deafness Support Network – we support people of all ages in all aspects of their lives through every eventuality, whether that’s helping a deaf person pay a bill over the phone, or leading young people to learn that there are more opportunities for them in the future, like this visit to ITV.

“We want to thank the whole ITV team for their help and encouragement during the visit and we look forward to working with them even more closely in the future.”